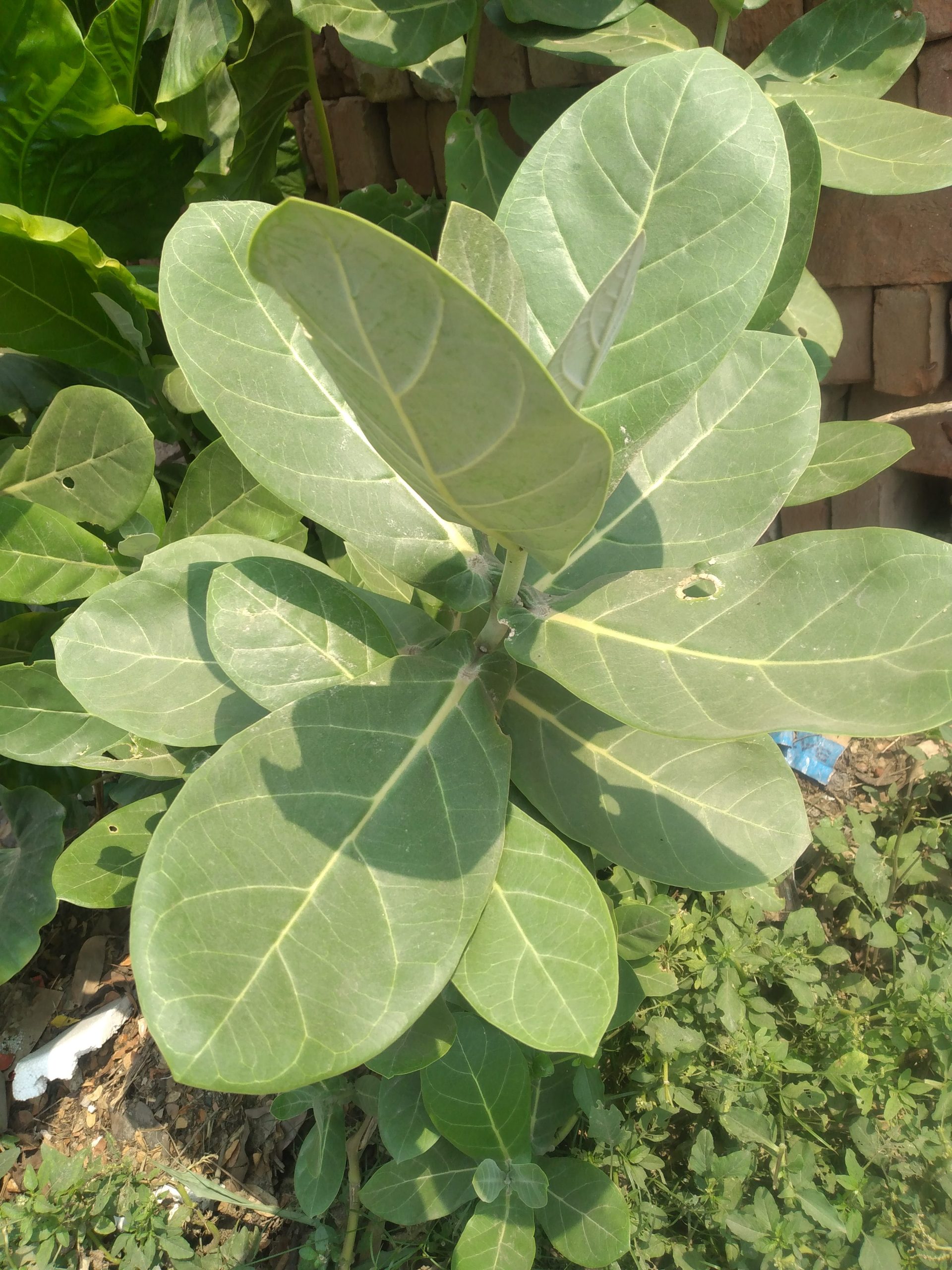 Calotropis gigantea, the crown flower, is a species of Calotropis native to Cambodia, Vietnam, Bangladesh, Indonesia, Malaysia, the Philippines,Thailand, Sri Lanka, India, China, Pakistan, Nepal, and tropical Africa.
It is a large shrub growing to 4 m (13 ft) tall. It has clusters of waxy flowers that are either white or lavender in colour. Each flower consists of five pointed petals and a small “crown” rising from the center which holds the stamens. The aestivation found in calotropis is valvate i.e. sepals or petals in a whorl just touch one another at the margin, without overlapping. The plant has oval, light green leaves and milky stem. The latex of Calotropis gigantea contains cardiac glycosides, fatty acids, and calcium oxalate. The roots also contain Calotropone.

The flowers are long lasting, and in Thailand they are used in floral arrangements. The extract of flowers and leaves has shown hypoglycemic effect in preclinical studies.They were favored by the Hawaiian Queen Liliuokalani, who considered them a symbol of royalty and wore them strung into leis. In Cambodia, they are used in funerals to decorate the urn or sarcophagus and the interior of the house holding the funeral. The fruit is a follicle and when dry, seed dispersal is by wind. In Indonesia its flowers are called widuri. According to the Shiva Purana, the madar flower/crown flower is very much liked by Lord Shiva; therefore the crown flower and its garland are offered to Lord Shiva for peace, prosperity and stability in society.The Crown flower is also one of the major parts of the nine astrological trees (Navagrah tree).

Calotropis yields a durable fiber (commercially known as bowstring of India) useful for ropes, carpets, fishing nets, and sewing thread. Floss, obtained from seeds, is used as stuffing. Crown flower cotton can also be used to make a pillow. A fermented mixture of Calotropis and salt is used to remove the hair from goat skins for production of nari leather and from sheep skins to make leather which is much used for inexpensive book binding.Fungicidal which is far effective than oinmentand insecticidal properties of Calotropis have been reported.

In India, the plant is common in the compounds of temples and is known as madar in Hindi: मदार. Its leaf (Marathi: rui) is one of the five leaves used in the Panch Pallava, a ritual assortment of five different leaves used as a totem by the Maratha culture in India.

Allelopathic effects of Calotropis on different agricultural crops have been well studied. Extracts of plant parts such as root, stem, and leaf affect germination and seedling vigor of many agricultural crops. However, extracts of Calotropis failed to produce any detrimental effects on weeds such as Chenopodium album, Melilotus alba, Melilotus indica, Sphaeranthus indicus, and Phalaris minor.

Use as an arrow poison

Many plant and animal extracts have been used as arrow poisons all over the world. In many cases, the poison was applied to the arrow or spear to aid the hunting of prey. Alkaloids are among the most powerful plant poisons, and extracts of Strychnos species are commonly used. Other arrow poisons are commonly cardiac glycosides, which can be found in digitalis, but most of these arrow poisons are derived from plants in the family Apocynaceae. This family includes Calotropis gigantea and the more potent Calotropis procera. The latex of these plants has been used in Africa as an arrow poison. Apocynaceae species often contain a mixture of cardiac glycosides, including calactin, uscharin, calotoxin, and calotropin. These poisons work by inhibiting the sodium-potassium pump, and this effect is especially potent in the cardiac tissues.[16] The cardiac effects can be applied for heart medication, and digitalis has been used as such. However, excessive doses can cause arrhythmia, which can lead to death.

Given the potent bioactivity of calotropin, calotropis gigantea has been used as a folk medicine in India for many years, and has been reported to have a variety of uses. In Ayurveda, Indian practitioners have used the root and leaf of C. procera in asthma and also used in bacterial infection, swelling with redness, boils also and shortness of breath and the bark in liver and spleen diseases. The plant is reported as effective in treating skin, digestive, respiratory, circulatory and neurological disorders and was used to treat fevers, elephantiasis, nausea, vomiting, and diarrhea. The milky juice of Calotropis procera was used against arthritis, cancer, and as an antidote for snake bite. However, these reports are of folk uses and more research is needed to confirm the clinical usefulness of the leaves, latex, and bark. Recent studies have displayed use of calotropin as a contraceptive and as a promising cancer medication.In one study of the cancer-fighting properties of Calotropis gigantea, DCM extracts were demonstrated to be strongly cytotoxic against non-small cell lung carcinoma (A549), colon carcinoma (HCT 116), and hepatocellular carcinoma (Hep G2). These extracts show promise as cancer medications and warrant further clinical research.

Tincture or trituration of bark of root. Tincture of the milky juice.

Characteristics.-The inspissated juice, root and bark have been extensively used in the East for their emetic, sudorific, alterative, and purgative qualities. The fresh juice is considered a valuable remedy in skin affections. A short proving brought out the following symptoms: Weak, tired feeling; coldness; dizziness; pain and confusion in head; nausea and vomiting of bile; frequent micturition; pain, soreness, and redness of thigh pain in both legs, swelling of knees, stiffness and inability to walk pains in hands and feet; first left then right, pains < movement or putting weight on them. Dr. Gramm, of Philadelphia (Minn. H. Mag., Aug., 1897), has used the tincture with great success in cases of syphilis when Mercury can no longer be given; in the anaemia of syphilis; secondary syphilis. A sense of warmth in the scrobiculus cordis is a leading indication for the remedy.-In one case of severe and advanced syphilis, with enormous thickening of the ends of all the nails, Calo. effected a cure. The remedy was given in one- to five-drop doses of the tincture, or in pellets saturated with equal parts of the tincture and 95 per cent. alcohol.

2. Head.-Dizziness.-Dull occipital headache from 11 a.m. till midnight, very bad at times in evening.-Head painful, throbbing, and confusion.-Head and face hot.

11. Stomach.-Constant eructations.-Faint and giddy with inclination to vomit; after strong coffee vomited a wineglassful of yellow bile.

14. Urinary Organs.-Frequent urination.-Urine dark red, like homebrewed beer, and with strong smell but no noticeable deposit.

22. Upper Limbs.-Cramp-like pain in centre of r. palm when grasping anything, lasting many days; pain in wrist when moving it.

23. Lower Limbs.-Slight pain when moving at inside of r. thigh just below groin: two days later back of thigh very sore and hard, making turning irksome; next morning thigh sore, swollen, and painful, so that he could not bend leg in walking, which gave him pain at every step.-Slight pain in l. foot on movement, or when bearing on it; with deep tenderness as if up tarsal bone.-Intermitting cramp-like pain, must keep foot moving about in bed.-Pain in foot when at rest so severe as to bring pain into eyes; > after coffee; later, instep slightly red and swollen but not tender; unable to put foot to ground except by very slow degrees, could then stand without pain, but pain returns when taking weight off again.-Some days after, r. foot began to pain and became the worse of the two.

26. Sleep.-Restless and feverish; tossing from side to side.

27. Fever.-Body cold, frequent chills passing up spine; at same time head and temples hot, cheeks burn like fire.-Chill returned towards bedtime though he was close to the fire; continued in bed, running from feet up spine, movement of feet seemed to excite them.-Fits of perspiration alternating with chills.